Last Thursday we had the opportunity to check in with Zacchaio’s phenomenal pulmonologist. He had been on leave for the last few months which meant he was unaware of the incredible progress Zacchaio had made since their last visit. While strolling out the door following a very pleasant reunion, a tidal wave of irony (in the form of snot) flowed from his nose.


A coin flip is as good as any medical prediction when it comes to Zacchaio and acute illness. Heads: Zacchaio would handle it like a “normal kid.” Tails: A visit to the ICU. It makes it tough to plan when he is such an extremist.

Within 24 hours of the first nose wipe, our home interventions were failing. Though he didn’t seem quite ill enough for an ER visit, we decided that going in before his vital signs necessitated so had the potential to shorten the length of his admission. Convincing the ER doctor to admit him was more challenging than in times past. Regardless of how convincing my arguments were, the doctor was struggling to find clinical evidence to warrant an admission. That’s when I left it up to Zacchaio. There have been numerous times in Zacchaio’s life where Aidan and I have had to pause whatever chaos we find ourselves in, get serious, and tell Zacchaio to do whatever it takes to get himself what he needs. It was only 10 minutes later that his oxygen saturations dropped, he started breathing rapidly, and his heart rate and his temperature both spiked.
Upon being admitted, Zacchaio received his usual cocktail… IVs, labs, chest xrays, cords, monitoring, suction, feeding tube, respiratory treatments, etc. We usually see him perk up with the additional support, but this admission didn’t follow the standard course. His condition worsened; we discovered that Zacchaio had RSV (Respiratory Syncytial Virus). In healthy children and adults it manifests as a mere cold; in Zacchaio’s case (premature with a weakened immune system) it wreaked havoc on his body. For days Zacchaio lay listless, without enough energy to even lift his hand off the bed or utter a sound. He scared us. One would think that after so many hospital admissions we would be used to the sight of illness.  When I thought back, however, to the last time he was in this condition, I realized it had been in August 2014 following brain surgery. I thanked God for the 5 month respite and found myself glad that this feeling of helplessness remains foreign.
Zacchaio’s condition worsened over the first 5 days of his ICU stay. 102-104 degree fevers persisted, and Tylenol alone was unable to bring temperatures to a normal range .  Lab results confirmed that Zacchaio not only had RSV, but also Rhinovirus. Talk about getting kicked when you’re down; a double dose of virus in a body that historically has trouble with one at a time! It was time to harness the power of Z! 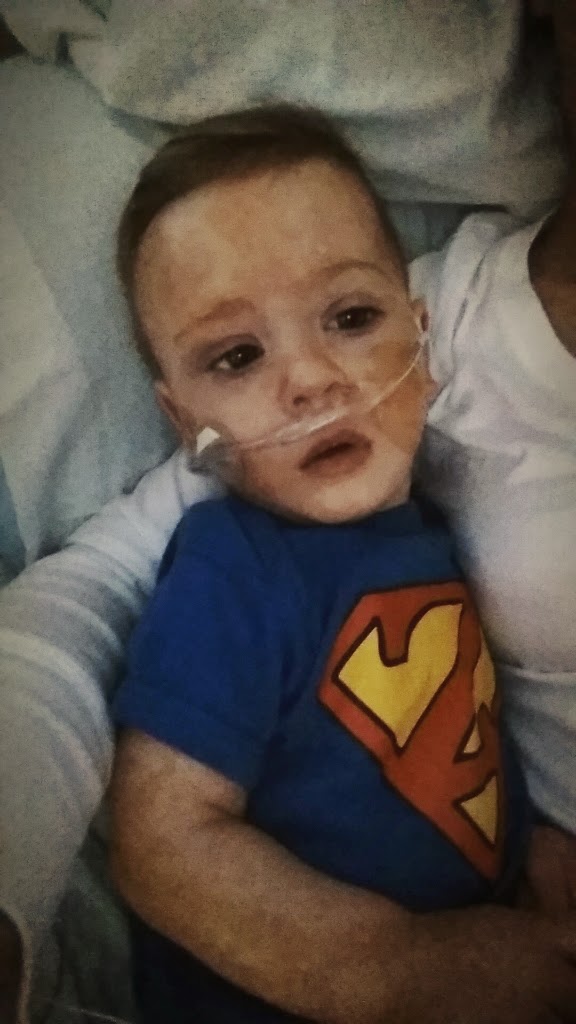 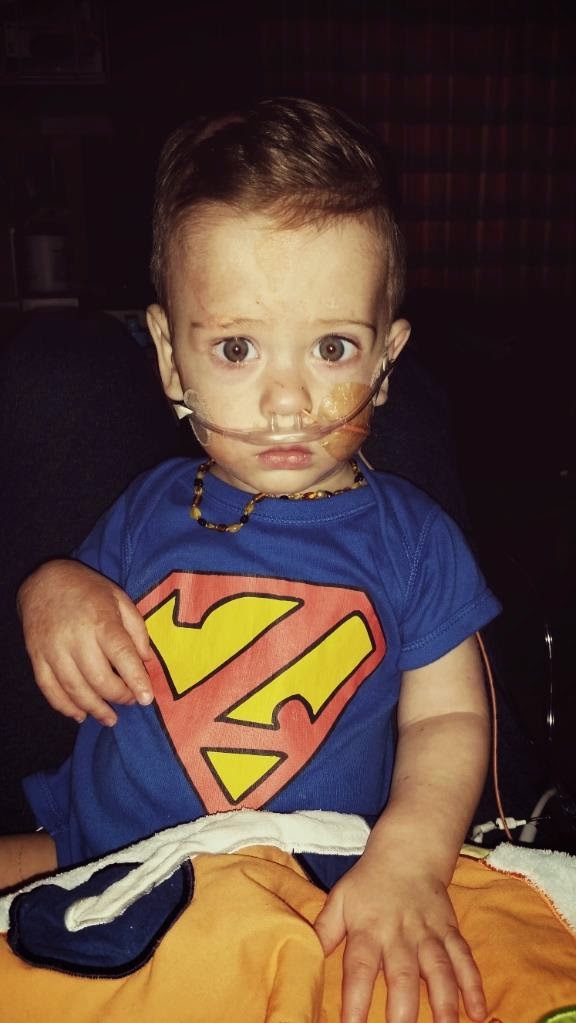 By morning of day 6 he finally made a turnaround. He snapped the nurse's face mask on and off her nose, he stood in his hospital crib and cruised around the outer reaches on a treasure hunt for EKG leads, SpO2 cords, and a resuscitation mask. After a week without smiles, his first was certainly worth the wait.
Some good news: Zacchaio was discharged on the afternoon of day 6 in the hospital. Labs confirmed no leukemia. Xray confirmed no pneumonia (which sometimes develops with RSV). He also had a 36-hour EEG to rule out a couple of concerning seizure-like behaviors.  Still seizure-free!


Bad news: Zacchaio had his first of many routine abdominal ultrasounds to rule out a Wilm's tumor (a rare tumor of the kidneys that mostly affects children). The screening plan is ultrasounds every 3 months for 2 years, then every 6 months for the next 5 years. Unfortunately, a spot was found on his right kidney (the side his syndrome affects) and though the radiologist believes it may be a cyst, they are not yet confident in their diagnosis. In the meantime we're waiting to hear when further imaging will be necessary.
Zacchaio has transitioned home very well! He definitely recognized home! He practically jumped out of my arms to crawl to the living room table, stand up, and empty the remote tray. He has a productive cough that will likely  linger for the next few weeks, and we were told to stay home for at least the next week so his immune system can play catch up.

This week we finalize the caregivers who will be caring for Zacchaio when I go back to work.  I can’t say I’m excited to leave him, but I am incredibly grateful that Zacchaio is "healthy" enough, and our lives normal enough, that I can finally return to a hospital in a professional capacity.
Next week Zacchaio will be fitted for a helmet to wear during times of activity. He still has a large area on the right side of his head where his skull has not regenerated; to minimize the risk of serious trauma following a fall we thought it best to add a layer of protection.
After posting a picture of Zacchaio in his SuperZ shirt on Facebook, I received a number of requests for similar adult shirts. They are officially available to order for the next 2 weeks for anyone interested! https://www.booster.com/superz