We didn't waste much time. Within twenty four hours of discharge we were on a plane heading home to good ol' California!

That's not to say that leaving the Ronald McDonald House wasn't a difficult task. We said goodbye to a Greek family whose daughter contracted a disease from a mosquito bite which necessitated intestinal transplants she was disappointingly rejecting. We lovingly waved farewell to the dad who lost his 5-year old son to a leukemia days prior to our departure. The day before he passed the house threw him a birthday party even though his birthday wasn't until November. Alkaio yelled an enthusiastic, "See ya later, alligator!" to the young girl he played with every day; she struggles with seizures that remain resistant to medication. Behind every door was a family with a story of struggle that no one wants to hear. Each tell it so gracefully. We couldn't have asked for a better home away from home where a simple, "Good morning!" from one resident to another really meant, "I hope today is a better day. May our children find peace and healing, and may we as parents find patience as we watch our children overcome." If you're ever looking for a charity to which to donate your time or money, we highly recommend any Ronald McDonald House. Know that you would be making an irreplaceable difference in the lives of ill children and their families.

Though stepping foot in our own home was utterly magical, home was familiar yet strange. Our nomadic life from one medical facility to the next had become our new normal. After tucking in each boy in their own beds on our first night home, Aidan and I dramatically collapsed onto our pillows. We looked at each other with eyes full of wonderment that we survived it all, that we had wiped the slate clean, and that our small family of four was still a cohesive unit after all we had been through. We couldn't help but sigh with relief and amazement that life felt manageable in that moment.

All of you are asking about how Zacchaio's seizures are doing... Unfortunately, the only answer I can give with 100% certainty is, "We're not quite sure." Only days after our arrival home we sat amongst some of our favorite company at our neighbors' dinner table. Zacchaio was fast asleep in my arms when his eyes opened abruptly, his legs stiffened, and he leaned forward while appearing to be in a trance. The behavior exactly mirrored one of the many types of seizures Zacchaio had prior to surgery (this one in particular we labeled the "Rise of Frankenstein"). Aidan and I looked at each other and felt our hearts break. We lasted as a normal family for four days. Though surgery helped us push the reset button, we were now following the exact path we traveled just two months prior. I lost my composure at the dinner table as tears welled and began to stream.

After some minutes of mourning the loss of seizure freedom, I immediately found myself in "fix it" mode and began brainstorming our next steps (I find that I sustain myself by planning and taking action on behalf of Zacchaio). I deliberately left my suitcase packed for this exact reason. I knew it was too good to be true. While frantically drafting e-mails to different neurologists with my proposed plan, I had a moment of clarity. If this was in fact a seizure (which I still believe it was even though it technically hasn't been correlated clinically yet), it was just ONE seizure. ONE seizure is not reason to remove the remainder of our son's right hemisphere. ONE seizure is not reason to start a new anti-epileptic drug. ONE seizure is manageable. The new plan was to continue watching and documenting the frequencies of the "likely seizures." If they become daily occurrences, we'll go in for an EEG, capture the behaviors, and clinically diagnose them as seizures if that is indeed what they are. Until then we continue living in the gray area in between. I don't particularly care for the color gray... We're learning to embrace the color gray...

If you recall my last post, the neurologists at the Cleveland Clinic reiterated prior to our departure that we should expect Zacchaio to have a number of strange happenings and odd behaviors as he adjusts to his new brain and altered vision. We have seen a number of these, though it seems to be happening less frequently with every passing day. They range from a half wink in one eye to startles that awaken him from a deep sleep to strange eye rolls to somewhat absent gazes into the distance. We have not seen a "likely seizure" since last week's "likely seizure." I pray the trend continues...

Besides strange behaviors, what has been happening in the last week and a half since we have been home? Well, life has been extraordinarily normal and I never knew there could be such exceptional delight in normal! 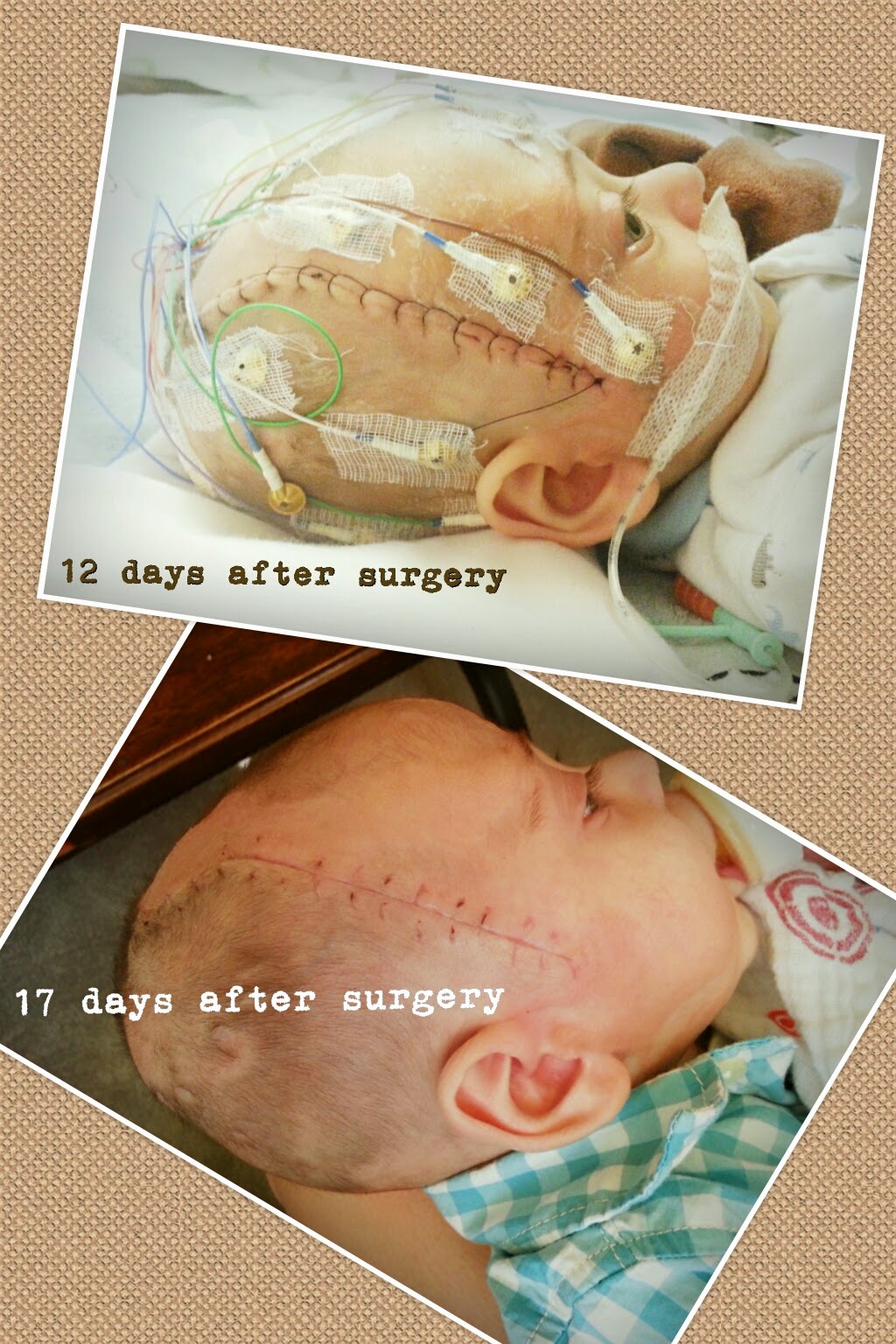 What's next on the docket?

We have left UCSF neurology and will be seeking guidance from a new neurology team at Stanford's Lucile Packard Hospital.  Stanford will fill the need for a local neurologist (as long as they live up to our high expectations), but we will also seek a second opinion from a neurologist out of UCLA's Children's Hospital who specializes in infantile spasms. Having additional and objective professional opinions surrounding Zacchaio's epilepsy was integral in shaping the course we took with his epilepsy management. Seeing as how well it served us, our plan is to follow up with the Cleveland Clinic in December (standard 3-month post-op appointment), to see a Stanford neurologist regularly, and to have the UCLA physician add his expertise specifically for infantile spasms.

We see Zacchaio's ophthalmologist on Wednesday due to increasing concerns of a lazy eye. We were told that lazy eye is expected initially after surgery and that with time it should improve. We have noticed it has worsened in the last couple of weeks and when Zacchaio looks to the right, his right eye is much lower than and mismatched with his left. There may be an eye patch (Arrgghh!) or eyeglasses in his future... We'll see!

Aidan is heading back to school next week. I'm afraid to be without him for the sake of losing his positive and grounding voice. He somehow transforms his physical presence as a single man into that of ten men. On a daily basis he bends over backward to lessen the overwhelmingly heavy load I often find myself taking on. Although we have been at this "together" for the last eight months, we miss one another tremendously and look forward to one day getting some extended quality time. Assuming we maintain Zacchaio's health, I plan to return to work in November. We'll be on the lookout for someone with LVN/RN experience to care for him a twice per week while Aidan and I are at work. If you happen to have any recommendations please send them our way!

We can't wait to take on another day in this typical, ordinary, average, humdrum marvelous life that is now ours.