Do You Believe In Miracles?

On Monday we met with Zacchaio's neurologist, Dr. Wyllie, whose recommendation was to cease the discussion about a second surgery, start the anti-epileptic drug Vigabatrin to control his ongoing seizures, and discharge us home. Her intentions were to allow Zacchaio time to grow and develop, and to have him return for his second surgery once he was bigger (greater blood volume equates to a less risky surgery) and his seizures had worsened. At the end of our discussion I was left with a sour taste in my mouth. If we have to start Vigabatrin, why did we remove a quarter of our son's brain? We could have started Vigabatrin before touching him with a scalpel. Why are we toe-dipping in two different pools of epilepsy management? When we set out on our cross-country trek a month and a half ago, our goal was seizure freedom, not seizure betterment. Aidan and I were all in, and stopping now felt like half-assing it.

Zacchaio's neurosurgeon, Dr. Bingaman, was scheduled to meet with us shortly after Dr. Wyllie's departure. He did his usual: dramatic entrance, sarcastic remark, sit down, cross legs, frank conversation. It was as if he had a direct line from my brain to his lips (neurosurgeon's intuition?)...

"Alexis, I know we said we were going to go back in to finish the hemispherectomy if he continued having seizures...

"Well, what Dr. Wyllie was saying was-"

"You're unhappy with what she said. Unfortunately, you were born with the qualities you were born with." Dr. Bingaman's sarcasm at its finest. "You're a fixer by nature and you want to fix him. At the end of the day you want to say you did everything in your power to give him the best chance at developing and leading a seizure-free life."

"Right. And if it proves to be unsuccessful, I-"

"You're prepared to deal with it."

"I'm prepared to deal with it. Because regardless of how this turns out, we're going to be dealing with a whole lot of something for the rest of his life."

There was a longer than expected silence...

"Just to let you know, if I were you I would be doing the same thing."

He proceeded to explain the surgery...

"We're going to completely remove whatever is left of his parietal lobe (his sensory and motor cortex).  He's obviously going to be paralyzed on his left side after we remove it. He'll eventually be able to move his shoulder and elbow, but he will have no fine motor movement in his left hand. He'll walk with a noticeable limp for the rest of his life. Back to surgery. I'll trace around the frontal lobe to complete its disconnection but I'll leave the brain tissue in place to reduce the chances of hydrocephalus developing."

"Gee, I was going to ask if you could leave it. Guess we're on the same page?"

"How does Thursday sound?"

"Sure. Let's go ahead and do some EEG before Thursday. We'll put it on now and monitor for 2 days? We'll make a final decision on Wednesday and I'll pencil him in the surgical schedule for Thursday. Sound good?"

"Sounds great. That way we can compare-"

"We'll compare it to the post-op EEG we did a week ago. More information. Good?"

And that was that.

I've never seen hospital time in such fast motion. Zacchaio's personal EEG tech, Betsy, had electrodes  decorating his scalp within an hour. It was very clear that when Dr. Bingaman issues orders, everyone's ears perk up.

By Tuesday, Zacchaio had been monitored for seizure activity for twenty-four hours. Overnight, Aidan diligently pushed the seizure button every time he witnessed a strange eye movement or behavior. Both of us assumed they would end the EEG monitoring a day early, as we had captured all of the behaviors we had been concerned about over the last few days. When neurology briefly popped their heads in, they asked if we could continue monitoring for one more night. We gladly obliged, though I'm not sure Zacchaio was as thrilled to give them the extra day.

And so after forty-eight hours of monitoring, our epilepsy team walked in. Everyone was in agreement. No surgery.

What? No surgery? I thought we discussed this!

A smile started to form on Dr. Gupta's face.

"Alexis, he hasn't had a single seizure for the last forty-eight hours."

There was a long silence while my eyes widened and awkwardly stared at him.

"Dr. Gupta, are you telling me that after surgery one week ago he was having as many as 400 seizures per day, and now he hasn't had one?!"

"That's what I'm telling you."

"I thought you would say that." 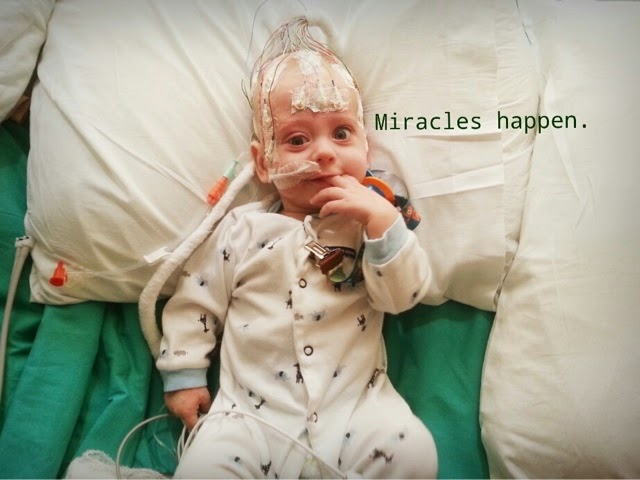 I wish I could say he went on to explain how it was possible, but he couldn't. Aidan and I had been secretly in agreement that we weren't seeing as much abnormal activity in the last few days, but we were too afraid to admit it. We were both determined to be realistic about Zacchaio's condition and couldn't afford to have our hopeful subconscious mislead our neurology team. The intermittent eye blinks, eye glances, and startles we had been seeing in the last few days were definitely different than what we were seeing during Zacchaio's post-operative EEG one week ago, but we feared what that meant.

Dr. Gupta continued to explain that the behaviors we were witnessing are Zacchaio acclimating to his new brain (or lack thereof) and his new vision. Nothing he was doing was correlating to anything abnormal on the EEG. In fact, Dr. Wyllie kindly chimed in that while Zacchaio sleeps, his brain is doing all of the "smart things it should be doing," as in alpha, beta, and delta waves, spindles, etc.

I was still skeptical. I asked Dr. Gupta about Zacchaio's interictal spikes (brief electrical discharges). Prior to surgery he was having them regularly, every 3 seconds. After surgery he was having small, intermittent clusters of them. And now? He said they were very infrequent and if he had to quantify them, maybe there was one per hour. He smiled again and reiterated that spikes are not seizures, just brief surges of electrical activity that last less than a second. He went on to say that there is potential for Zacchaio to have these spikes for the rest of his life and remain seizure-free with no concern from neurology.

He said slowly one last time... "He is not having anymore seizures."

I never thought receiving good news would be so challenging. One of the longest, most frightening chapters in our lives just ended, yet somehow in this moment I'm more afraid of the truth on subsequent pages.

Whenever I fell to my knees and prayed for our Zacchaio, I never asked for big miracles with little sacrifice. We were, and still are, willing to permanently disable our son for the chance of seizure freedom. I just never imagined God would be this good to us.

Zacchaio's seizure freedom is still not a guarantee. He may seize again in days, months, or years from now. But not today.

Today Zacchaio was supposed to have surgery. Instead Zacchaio brought our family home. 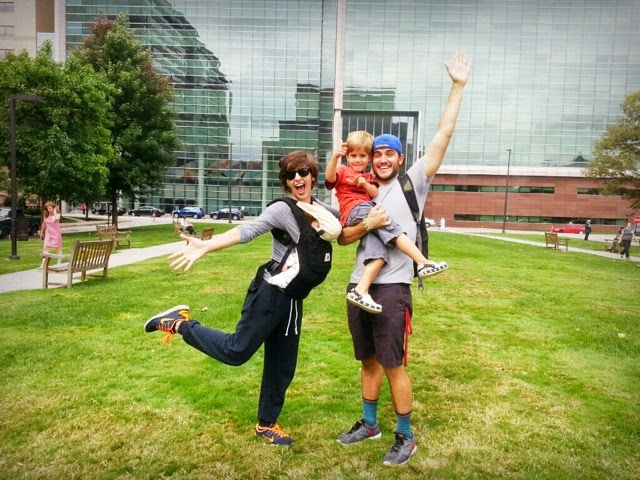