Zacchaio's last couple of days have been riddled with much struggle and few triumphs.

Zacchaio excels at getting his needs met, and he very clearly (and loudly!) made it known that we were not adequately managing his pain. In response, we began around the clock Morphine. Although Zacchaio achieved moderate pain relief with the narcotic, it also inadvertently slowed down his bowels (as narcotics do by nature) which led to subsequent constipation and food intolerance. We combatted his slow digestion with three different GI stimulants. Unfortunately his persistent low-grade fevers seem to have negated what progress they had made. He has continued to vomit his milk which puts him at risk for aspiration, and he has continued to vomit his heart medications which has perpetuated his arrythmia. His minimal caloric intake is now preventing his ability to maximize wound healing. In an attempt to break the cycle of negative side effects related to interventions, we recently stopped giving Morphine and switched to Motrin (ibuprofen). The anti-inflammatory and pain-relieving propertiies of Motrin have proven to be very effective for Zacchaio. In breaking one cycle we might have started another, as Motrin is blood-thinning by nature which increases Zacchaio's risk of bleeding which will likely push his surgery to a later date (though this may be what he ultimately needs).

In attempting to support him through his initial recovery, we have created so many more difficulties. I was beginning to feel like I was losing all control. Enter inordinate amounts of carbohydrates and refined sugars. Thank you, Fudge Brownie, for getting me through a difficult time.

For 80% of the day he is visibly uncomfortable. Even with Morphine on board he still whimpers with discomfort from his lacerated temporalis muscle and upset stomach. On rare occassion when he manages to find calm, he opens glazed eyes and stares toward a seemingly insignificant point in space. In a selfish attempt to reassure my soul that our joyful boy still exists within his pain-ridden body, I try to engage him during these peaceful moments. It turns out that the seemingly insignificant point in space he has discovered is his happy place, a place on which he focuses with such vigor so as to forget about the hurt. Who are we to be impatient? Take as long as you need, sweet guy.

Prior to Zacchaio's surgery I subconsciously created an expected post-operative course based on that of others who have had similar surgeries. In the last few days I became disappointed with his somewhat flattened trajectory of healing.

In needing to find a more productive approach toward his recovery, I am adopting the theory of tabula rasa (blank slate) in hopes of new perspective and opportunities to celebrate even the smallest of his successes.

The first of these successes occured on the morning of Day 5 when I rejoiced with tears. Zacchaio opened his eyes, gazed purposefully into mine, and responded to my greeting with a beaming smile. He said what I needed to hear most; "Mama, I'm still here." For the next few hours he responded to our signature sound effects with smiles and coos. The last time he was this receptive to us was months ago before this whole business of seizures. He remembered. He was really still in there. On Post-op Day 6 Zacchaio participated in physicial therapy for the first time. Seeing as he was unable to take part in days past due to lethargy and pain, this was another success! Though a bit resistant to start, he embraced his physical therapy as his therapists embraced him. He visually tracked for the first time and reached for his toys with a tentative smile. Atta baby! 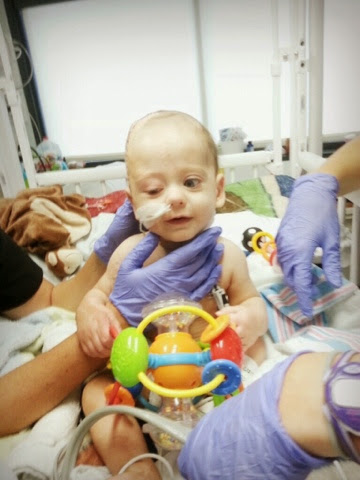 Though Zacchaio's seizures continue, we have noticed a surprising decrease in frequency. We don't want to set our expectations too high just yet, but we're obviously happy to see an improvement from his pre-surgical state.

Lastly, we received his post-operative MRI results that revealed nothing unexpected! There was no sign of stroke and no excessive swelling or bleeding present. Phew!

With such little progress made these last couple of days, it would have been easy to fall into despair. Though tears have been shed, the most recent that have fallen from our faces are not because of Zacchaio's struggles... They are because of you.

A sweet 12-year old is celebrating his entrance into his teens and has asked his guests to offer donations toward Zacchaio's journey in lieu of the joy of presents. Dearest friends continue to research and contact foundations on our behalf, inquiring as to how they can further assist with medical costs. Entire high school classrooms have paused in prayer, and prayer circles full of strangers continue to speak our baby boy's name. As you all continue to light candles worldwide, know that you are feeding our souls and Zacchaio's drive to heal.

We thank God every night for you, our family.

Better days are on the horizon...
Posted by Alexis KT at 2:31 PM