Post-op day two has proven to be a difficult one.

Overnight, Zacchaio spiked a temperature as high as 103 degrees that has unfortunately persisted through today (minus intermittent relief from Tylenol). He also vomited an entire feed in the middle of the night and two more during the day. He continues to be very lethargic and has preferred to rest more than anything else. The good news is that all of his vital signs have remained stable and labs continue to look good; blood cultures are pending. Last night the neurosurgical team wasn't too worried about the fever, but as it continued into today they began having increasing concerns. The swelling in his right eye is much worse today and was very bothersome for Zacchaio. Aidan said, "Babe, everyone keeps calling him a fighter, and now he actually looks like one! What a shiner..." Normally the remark would make me at least grin or sarcastically roll my eyes, but today I'm finding it difficult to keep the mood light. 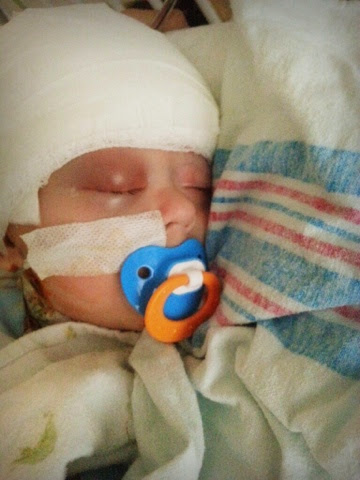 Though his overnight concerns have me a bit down, I have to remember to celebrate the successes even when they're muddied with setbacks. Zacchaio became much less tubular today! His wound drain was removed (3 inches of tube under his scalp), his arterial line was removed, a peripheral IV was removed, and his foley catheter was removed. On account of the high fevers, they also removed his central line (long IV that ends in the heart), as such an invasive line poses additional infection risk. His head dressing was also removed which ultimately exposed his scar to us for the first time. It is intense. The average incision made for this type of surgery looks like a question mark extending up and around the ear. We requested that Dr. Bingaman take a different approach with Zacchaio since he will be having plastic surgery to remove his scalp nevus in a few months. In trying to minimize the number of scars on his scalp, we asked that the incision be somewhat of a tracing of Zacchaio's scalp nevus. Dr. Bingaman did exactly that. We now hope that Dr. Hoffman (plastic surgeon) will work his magic and revise portions of Zacchaio's current scar as opposed to creating new ones. Scar photos will be posted at the end of the blog post so those of you who have queasy stomachs can avoid viewing it.

After Zacchaio opened his eyes for the first time after surgery, we noticed that he had a strong right gaze preference. He would make attempts to track something from his right to straight ahead, though every time he tried his eyes would strongly pull back to the right. As of today he has started to find more neutrality with his eyes which is great progress. I'm looking forward to his right eye swelling subsiding so he can begin to explore more of his visual field.

There have been a handful of times that we have noticed Zacchaio having eye movements that closely resemble pre-surgery seizures. While he's fast asleep, he suddenly opens his eyes widely as if startled, he gazes straight ahead for one second, and then closes his eyes while remaining asleep throughout the process. We were told prior to surgery to be prepared to witness breakthrough seizures post-operatively for a number of different reasons. It's difficult to know whether these slightly altered seizures are due to the swelling in his brain, a seemingly normal frontal lobe that is microscopically abnormal, or his healthy hemisphere having abnormal electrical activity. The neurologist mentioned that if it persists we could do a 24-48 hour EEG, though it is not standard procedure. We'll definitely be taking him up on that offer.

That's a wrap on Day 2. Praying for better days ahead for our baby warrior. 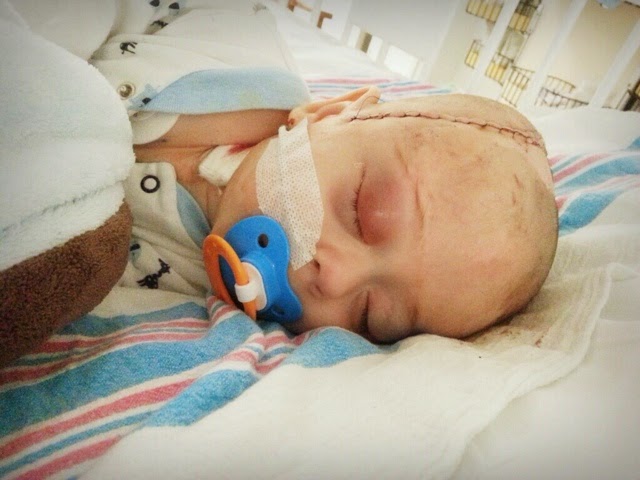 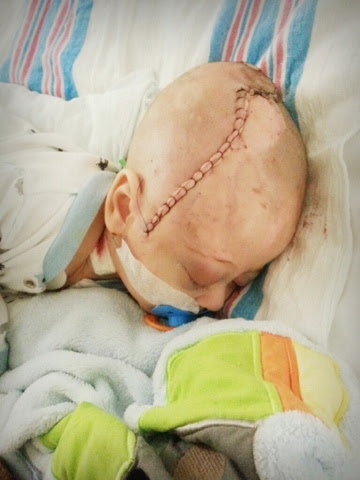 This evening Zacchaio's heart rate spiraled out of control and reached as high as 300bpm. Our best guess as to why is the persistent fever. Fortunately our subsequent intervention was successful, as starting him on a continuous IV infusion of a beta blocker aided him to regain rate control. We also decided to start him on around the clock IV Tylenol to help minimize the fevers and regular doses of Morphine for the extreme discomfort he appears to be in today.

Zacchaio threw up again, and again, and again. It had been 10 hours since he had last taken formula yet he still managed to vomit a strange pasty brown substance. He is now NPO (nothing by mouth) and will remain hydrated exclusively with IV fluids. Just as we established his NPO status, one of his two remaining IVs began to leak/bleed. This was not good news, as finding IV access on Zacchaio is considered a superhero's feat. Prior to starting surgery on Thursday, it took our anesthesiologist and her team three hours to gain adequate IV access. We counted the stick marks left on the undersides of both wrists; 13 attempts in one arm and 15 in another.

Prayers for our little man to find peaceful rest and comfort. Prayers for his continued strength and patience as we await the healing of his little body.
Posted by Alexis KT at 9:50 AM