Following the conclusion of Zacchaio's surgery, we had the opportunity to speak with his surgeon, Dr. Bingaman. Surgery went very well with no unanticipated difficulties or surprises. For once Zacchaio was run-of-the-mill. We were overjoyed with Zacchaio's extraordinary ability to be average! ;)

Prior to beginning the posterior resection, Dr. Bingaman did an intracranial EEG (where electrodes were placed directly on the surface of Zacchaio's brain to record electrical activity) and saw precisely the same electrical patterns we've seen in previous EEGs (interictal spikes every 3 seconds, infantile spasms, as well as additional types of seizures). Following the partial removal of his right parietal lobe, and complete removal of his right occipital and temporal lobes, his intracranial EEG of his frontal lobe (the only lobe left) had changed. Ideally we would have seen NO abnormal electrical activity of the frontal lobe, as our hope was that the seizure-generating tissue lied within the posterior (back) portion of his right hemisphere. Dr. Bingaman saw some interictal spikes in the frontal lobe, however they were infrequent and not regular. He did not see any seizure activity. He did tell us that upon removing Zacchaio's occipital lobe he noticed it felt abnormally firm. This reiterated the fact that there was likely cortical dysplasia (abnormal neuronal migration), and reaffirmed that we made the right choice in having surgery.

I found myself a bit disappointed with the news...

Dr. Bingaman was perceptive and picked up on my lack of enthusiasm surrounding surgery's outcome and did tell us this. It is still possible that all of the seizure-generating brain tissue was localized in Zacchaio's posterior right hemisphere, which has now been removed. We should keep in mind however, that because his posterior brain has been seizing so repeatedly for the last three months, his frontal lobe has grown rather accustomed to receiving and perpetuating chaotic impulses. It IS possible then, that as his right frontal lobe stops receiving impulses from the now non-existent brain behind it, it too will stop propagating abnormal impulses. We have faith.

To give you an idea as to what Zacchaio looks like currently, he has 3 peripheral IVs (one in each foot and one in his hand), an arterial line, a central line, a foley catheter to drain his urine, an NG tube, and a JP drain which is draining excess blood and cerebrospinal fluid from the surgical area. During rounds with the physicians today we said, "He's a tubular little dude!" I think they appreciated the lightness we like to maintain in the room. 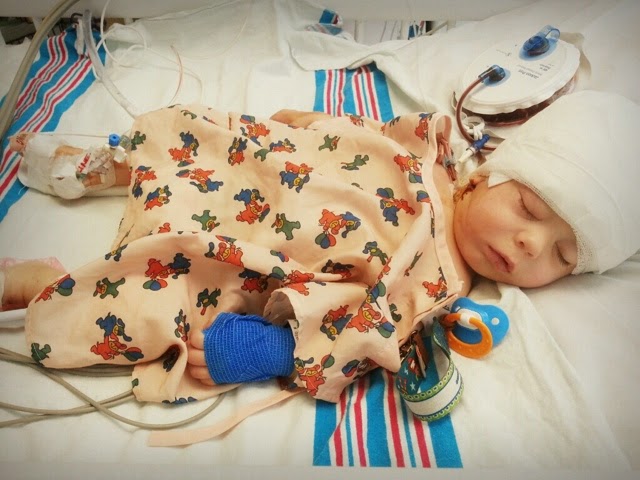 Overnight he had a few developments that aren't too concerning but are being watched closely. Zacchaio's right pupil is more dilated than his left, though Dr. Bingaman said it was due to all the trauma and subsequent swelling around his third cranial nerve and should resolve within a month. He was also bleeding more than anticipated out of his drain, though frequent hematocrit/hemoglobin lab draws are convincing the team that he is not in need of another blood transfusion (he received one in the OR). Keep it up, buddy...

I was with Zacchaio when he opened his eyes for the first time today, though he looked a bit like Quasimodo due to the swelling in both eyes with more extensive swelling in his right. One just never knows with a surgery like this; we were so grateful his desire to see the world was still intact. I captured the first few moments following his first eye opening.....

I was finally able to hold our little warrior today... and a true warrior he is! He has been getting by on only Tylenol and love for his pain. I suppose our love is pretty darned powerful. 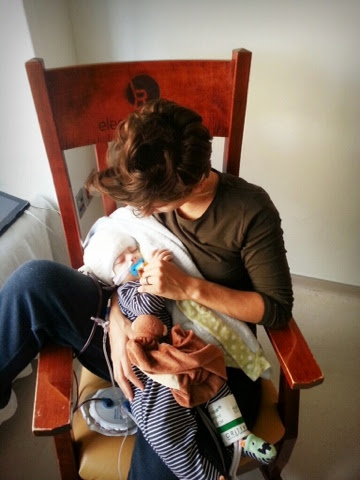 Team Zacchaio, your prayers, messages, and well-wishes are powerful healers! Prior to surgery Zacchaio was unable to get peaceful rest due to frequent epileptic spasms. I am thrilled to report that he has been resting comfortably without any signs of seizures!

Today will be another day of rest, and we hope with every passing day we see more of our baby boy come back to us! 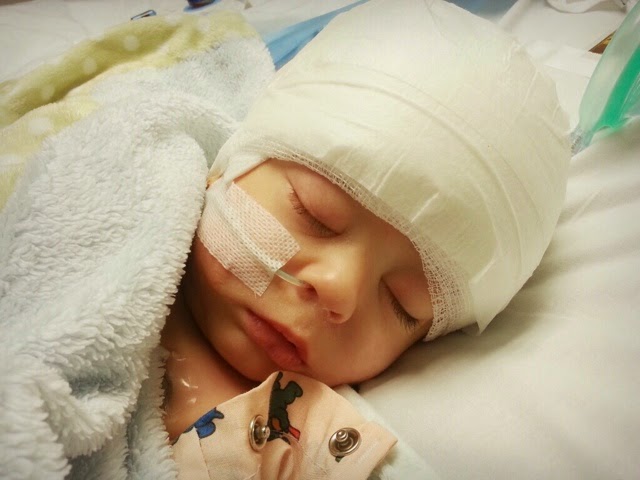