Twas the night before surgery...

Within an hour of the publication of my last post, Zacchaio's upper respiratory issues became a bit more distressing. His barky cough was more frequent and higher-pitched, his nose began to run again, and he was having increased difficulty clearing the junk that sat cemented in the back of his throat.

The following morning we had a phone appointment scheduled with the pediatric anesthesiologist. I was sure she was going to cancel surgery, as protocol typically states that any cold-like symptoms experienced within a week prior to surgery deems one unsafe for anesthesia. Surprisingly, she said she would check in with us today, two days later, to determine whether or not Zacchaio was in an upward or downward trend.

I obsessively reevaluated Zacchaio's health every hour today in hopes of having a clearer idea whether or not he would be having surgery tomorrow. Anesthesia called again this afternoon and I reported the latest. They said we could either cancel surgery or arrive at UCSF tomorrow as scheduled so the anesthesiologists could personally evaluate him and weigh the risks.

We saw a UCSF neurosurgeon today to get his insight on a couple of anatomical concerns. There is an area of Zacchaio's bone flap (the bone originally removed and replaced for brain surgery) that has, well, disappeared. Bone resorption is the process by which bone is broken down and its minerals are released.  This is supposed to be coupled with bone generation, but Zacchaio is missing a silver dollar-sized area of his skull that isn't coming back. We will continue to monitor its size, as well as take precautions to ensure it isn't forcefully contacted. The hope is that his skull will regrow and eventually fill in the gap, however considering that the gap has only grown in size over the last month, I am not very confident in the growth process. If it continues to widen, the plastic surgeon and neurosurgeon will have to intervene. We'll have more on that in the coming months.

As for tomorrow's surgery...

Our arrival time is scheduled for 8:30am with a 10:30am surgery time. Total time in the operating room will be 1.5 hours.

Praying our boy wakes up healthier in the morning...

Praying for good news regarding the biopsy.

Knock it out of the park, kid. 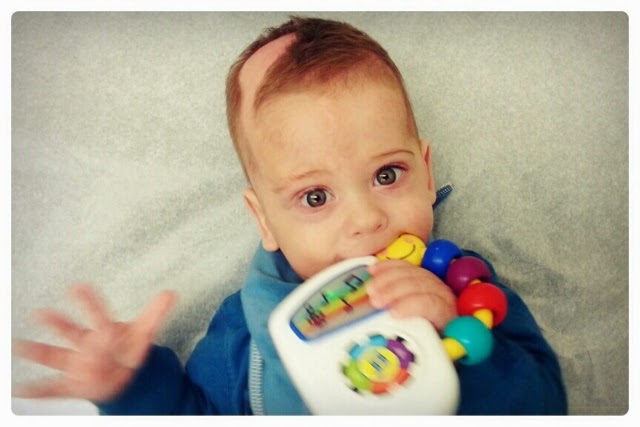