Being that our lives have the potential to change drastically yet again in the coming weeks, I felt this was a good time to document Zacchaio's current health status. It's easy to get lost in the details of his daily struggles, so this post will be a bit more summative and serves as an overall update and a reminder of the successes that he has achieved when we look at a holistic picture.

﻿﻿
In nursing we have a standard method of assessing patients called a head-to-toe...

Neurological
Zacchaio's interictal (between seizure) activity looks much worse than 5 weeks ago when he was originally diagnosed with epilepsy. The electrical activity in his right hemisphere is incredibly disorganized with such high amplitude that it is now registering in his healthy left hemisphere. The fear is that if this continues, healthy brain tissue in other parts of his brain will be recruited to participate in abnormal activity as well.  Our neurologist explained it this way: In a normal brain, the activity is like the indistinguishable hum in a crowded bar.  In Zacchaio's brain someone has stood and begun singing The Star Spangled Banner.  Their concern is that everyone else in the bar is now going to join in the serenade.

Our UCSF neurologists would like to trial a fourth anti-epileptic drug, Sabril (Vigabatrin), which in its nature inhibits brain activity (which is imperative for normal development) and has the potential side effect of permanent loss of peripheral vision. For now we're keeping the drug in our back pocket as a last resort, as we have already failed 3 medications and are not eager to attempt another. Our neurologists also highly suspect that there is a malformation in his brain which is the root cause of the seizures. The unfortunate reality is that the malformation will never go away. The seizures caused by the malformation will only get worse as it continues to develop with his growing brain. In trying to preserve as much brain function as possible, every minute counts.

There are people who think we are being extreme in our exploration of brain surgery, however it comes down to differing neurological goals for our baby boy. Some neurologists are focused on merely stopping the seizures (with medication), but at what cost? Children who receive Anti-epileptic drugs at such an early and critical time in their development rarely function at a high level. Not to mention, once we find an anti-epileptic drug that is effective in controlling seizures, they are often only effective for a short period of time. This means repeating the process all over again. We have seen potential long-term outcomes... Our son could have uncontrolled seizures for the rest of his life and seize himself into a wheelchair. He may not be able to speak, walk, orally feed, or have the cognition to understand a simple command. We don't believe that's quality of life.

As extreme as potential brain surgery might be, it gives us hope of complete cessation of seizures and thus a chance at normal development. I can't help but envision a future where our two boys lay in bed together at night giggling about the day's nonsense. I await the day they unite against us, their parents, because we refused to let them stay up late on a school night. Surgery gives us a 50-95% chance at eliminating seizures entirely, however it clearly comes with risks... stroke, infection, pulmonary embolism (blood clot in the lungs)...and death.

After getting Boston's treatment recommendations, we will be heading to the Cleveland Clinic in Ohio for our third and final opinion. Although Boston is #1 in pediatric neurosurgery, the physicians at the Cleveland Clinic have published the most research on Zacchaio's rare Linear Nevus Sebaceous Syndrome. With your donations you are allowing us to leave no stone unturned.

Zacchaio's right eye will perpetually have corneal opacities (clouding). We unfortunately had to miss our 3-month opthalmology follow-up due to his presentation of seizures for the first time; we hope, however, with our next appointment to receive news that the opacities have not grow any further and are not affecting his vision.

We also had to cancel his plastic surgery which was to remove his large scalp nevus and cutis aplasias. Although we were home at the time surgery was scheduled, his seizures were increasing in frequency. Anesthesia is also known to decrease an epileptic's seizure threshold (meaning more seizures for Zacchaio), so after careful consideration we didn't believe the benefit outweighed the risk. Surgery is rescheduled for October.

Cardiac
Although Zacchaio's heart has been rather obedient since he left the NICU in March, last week's admission due to aspiration and acute respiratory distress threw his heart back into its previous erratic state. Time and medication adjustments mostly remedied the problem, however he did return home with a temporary heart monitor so our cardiologist could continue to gather more detailed data for the team in Boston.

Pulmonary
Zacchaio's lungs are doing well! We are still pulmonary hypertension-free and are mostly dealing with lingering coughs and residual mucus following his latest admission.

On the last day of his hospital stay he was put through a high-altitude simulation test (which would clear us to fly to Boston) mimicking the decreasing oxygen concentrations experienced during a flight. Normal oxygen concentration on land is about 21%, however at cruising altitude it drops to anywhere between 17-19%, even as low as 15% on older planes. The pulmonary technician walked in with her supplies and stated, "I read his chart and he's probably not going to pass. You shouldn't get your hopes up." Aidan and I looked at each other with a grin and identical thoughts... She didn't know who she was dealing with. Not only did Zacchaio pass, he did it with blood oxygen concentrations of 93% when a passing level is only 90%! Don't ever underestimate our child again.

Gastrointestinal
Prior to being diagnosed with epilepsy, Zacchaio had made enormous strides with oral feeding. We were anticipating the removal of his NG tube in the near future, as he was taking up to 75% of his total feeds by mouth (with the remainder being fed through his NG tube). Once we added anti-epileptic drugs to his seizure management plan, he lost the strength to suck as well as any interest in food. We plan to begin oral feedings again once his lingering cough fades. UCSF was kind enough to give us a feeding pump for home which eliminates the need to "Statue of Liberty" a syringe in the air for 30 minutes while his food pours into his stomach via gravity. We have yet to find a way to blend the IV pole with the rustic decor of our home... 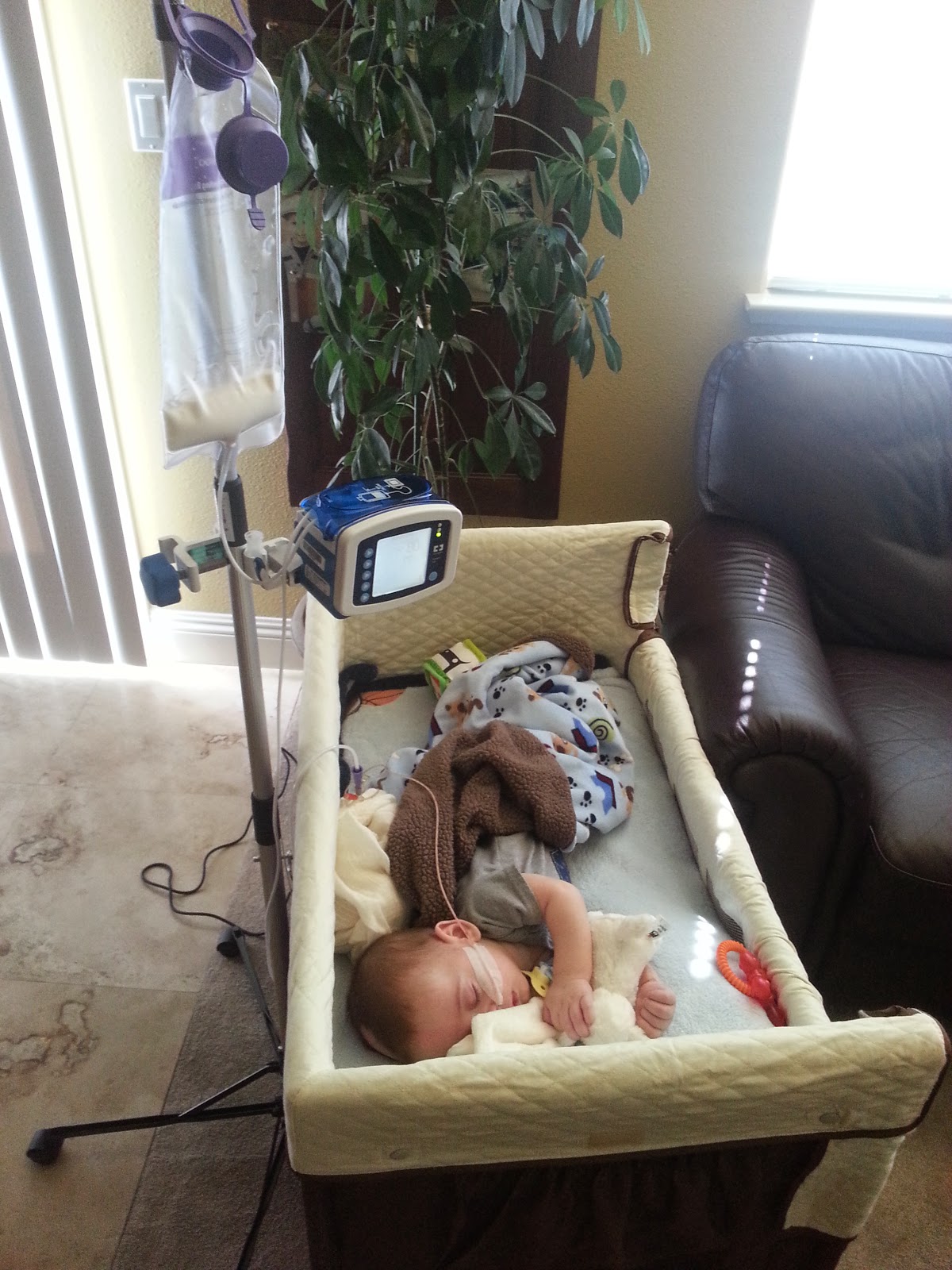 Genitourinary
It feels incredible to be able to say that one system in his body is completely healthy! Zacchaio's neurocutaneous syndrome has turned off the genes that stop cell proliferation making him very high risk for cancerous cell mutations. While an inpatient this week, Zacchaio had an abdominal ultrasound in search of anatomical malformations and tumors (most notably in the kidneys). Thank you Lord, it was normal! Ultrasounds will continue every 6 months and we hope to share good news with you following every exam!!

Musculoskeletal
Zacchaio has right-sided hemihypertrophy, meaning everything on his right side grows larger and more quickly. So far it has manifested in a number of ways. The right side of his skull is thicker than its counterpart. In addition, there is a bony protuberance over his right occipital lobe with uncertainty as to whether it's growing inward toward his brain (problematic) or outward (more benign). His right arm is longer than his left and his right hand noticeably larger. His right leg is also longer than his left; oddly enough, however, the circumference of his legs are now practically matching. He currently has vitamin D insufficiency (characteristic of his syndrome), and is at risk for worsening rickets (softening/weakening of the bones). We hope by aggressive management we can minimize the development of bone deformities.

Skin
Zacchaio was born with 80% of his right side covered in sebaceous nevi, overgrowths of the sebaceous glands, which manifest as yellow/orange/brown hairless lesions in body patterns following the lines of blaschko. These lesions are unable to slough off dead skin cells in the same manner that normal skin is able, therefore we have had to adjust our management. We have been using SimpleSugars coconut body scrub which has worked wonders on his nevi. His lesions went from being thick, dry, and dark brown to soft, more hydrated, and pink/light-brown. Zacchaio also has an excess of skin throughout his entire right side, with large visible lipomas (fatty deposits) on the right side of his scalp.


How are we doing as a family?
The night before Zacchaio was admitted to the ICU for his aspiration event, Alkaio patiently waited for me to finish up with his brother so I could return to his room for a goodnight tuck-in.  As the lullabies and kisses wound down, Alkaio very innocently said, "Mama?" "Yeah, bud." "I don't think it was a good idea to have a baby brother."

I silently cried in bed with him that night until he fell asleep and then I cried with Aidan for hours after. In focusing on nursing one son to health we neglected the other. We were doing our best, but clearly our best wasn't good enough. I missed Alkaio tremendously, and probably took advantage of his maturity and incredible ability to adapt to change so seamlessly. Aidan and I realized that Alkaio's honesty was a perfect reminder that it was time to find more balance and sustainability.

We decided to tackle hospital visits as single parents and no longer as a couple. One of us would stay all day and all night with Zacchaio while the other maintained normalcy at home with Alkaio. The following day we would switch. After a week of this we decided that Alkaio, Aidan and I would spend an afternoon at Fisherman's Wharf together while family kept Zacchaio company. We had a wonderful time. It was the first time in weeks the three of us had spent time together.  Aidan and I looked at each other and had the same thought... This is what our life used to be. It was so easy. No tubes, no hospitals, no seizures, no 24-hour watch... And just as we were missing our old life, Alkaio sighs and says, "Guys? I really miss my brother."

And then we remembered it is all perfect. 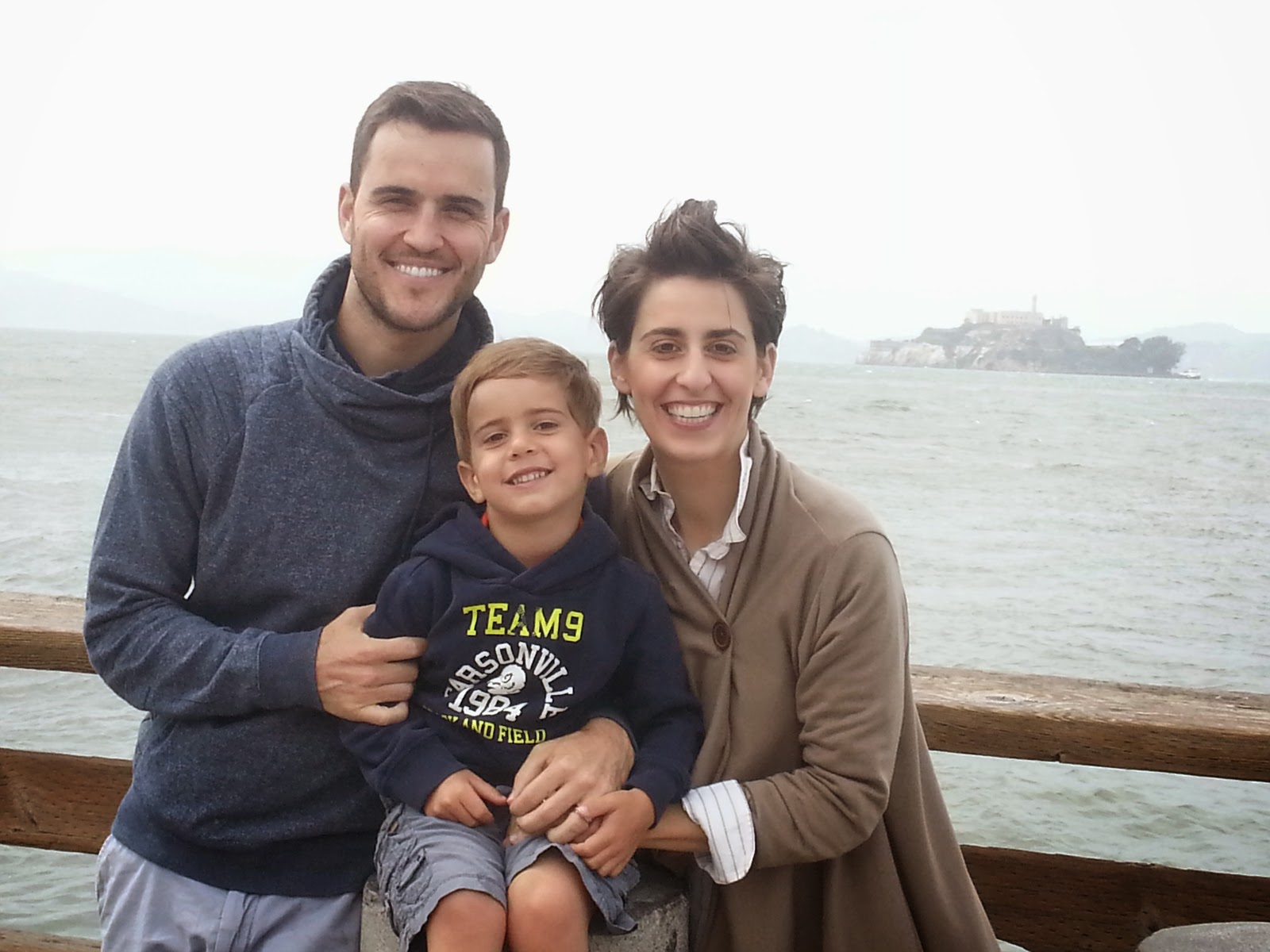 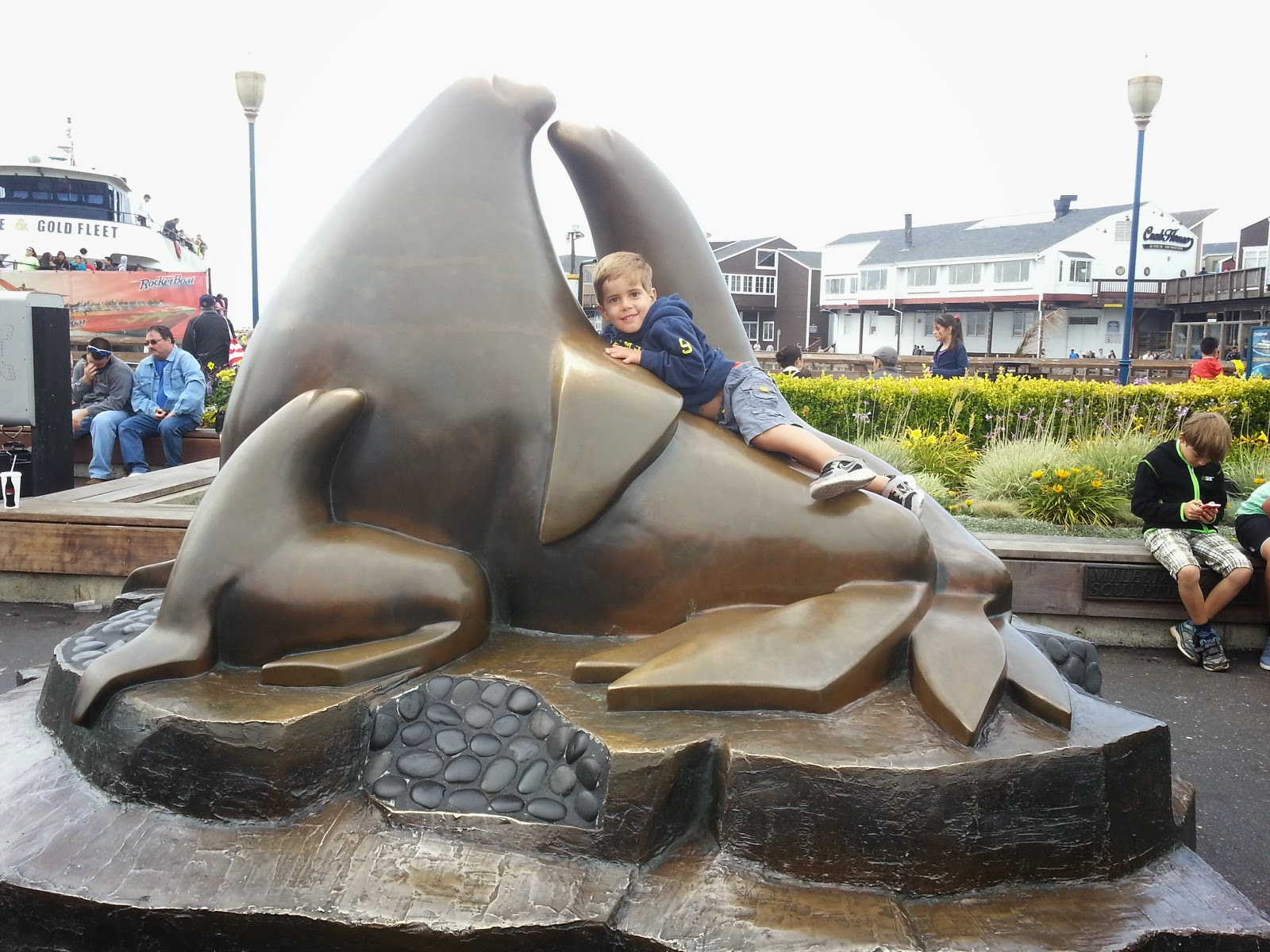 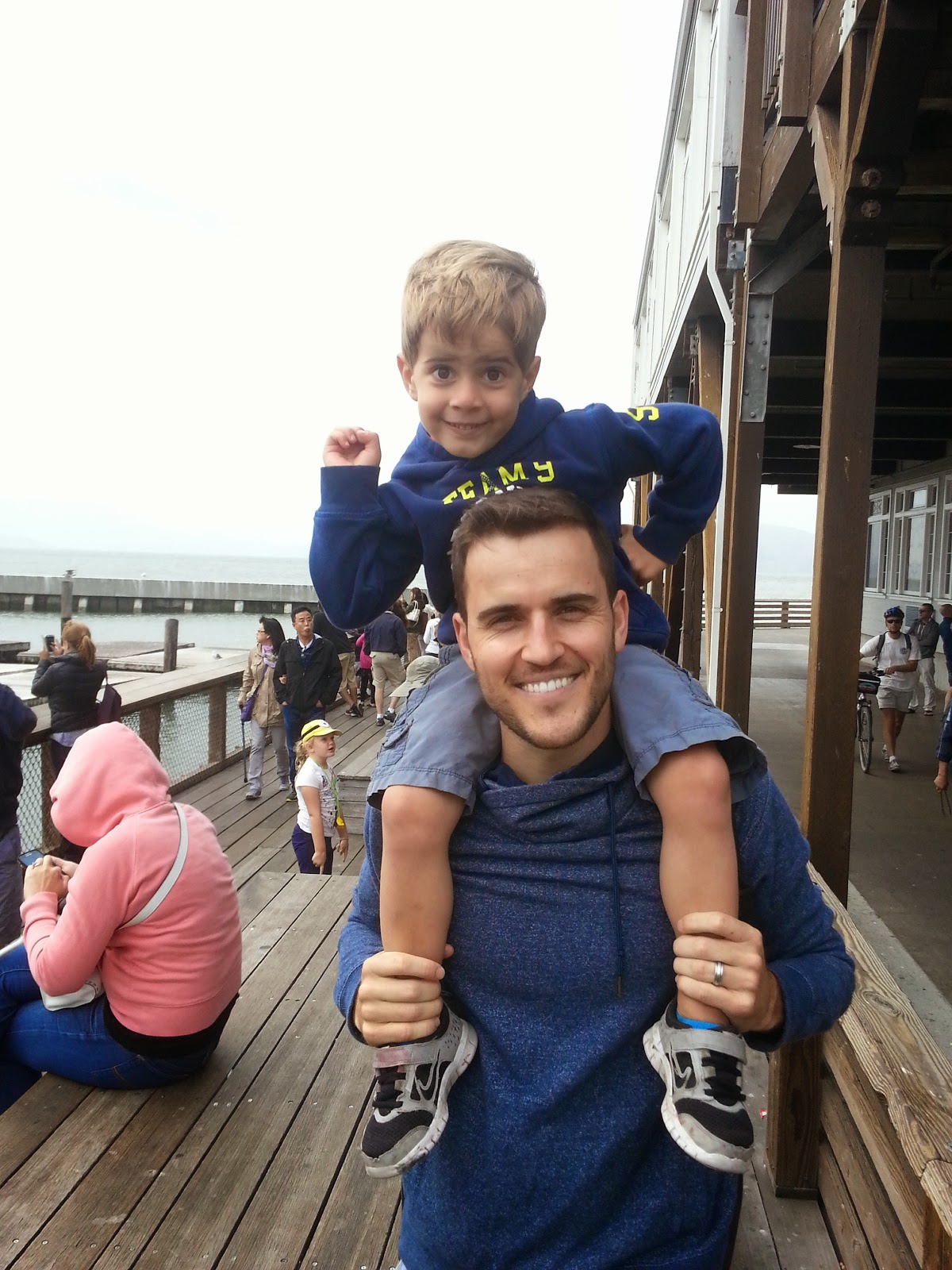 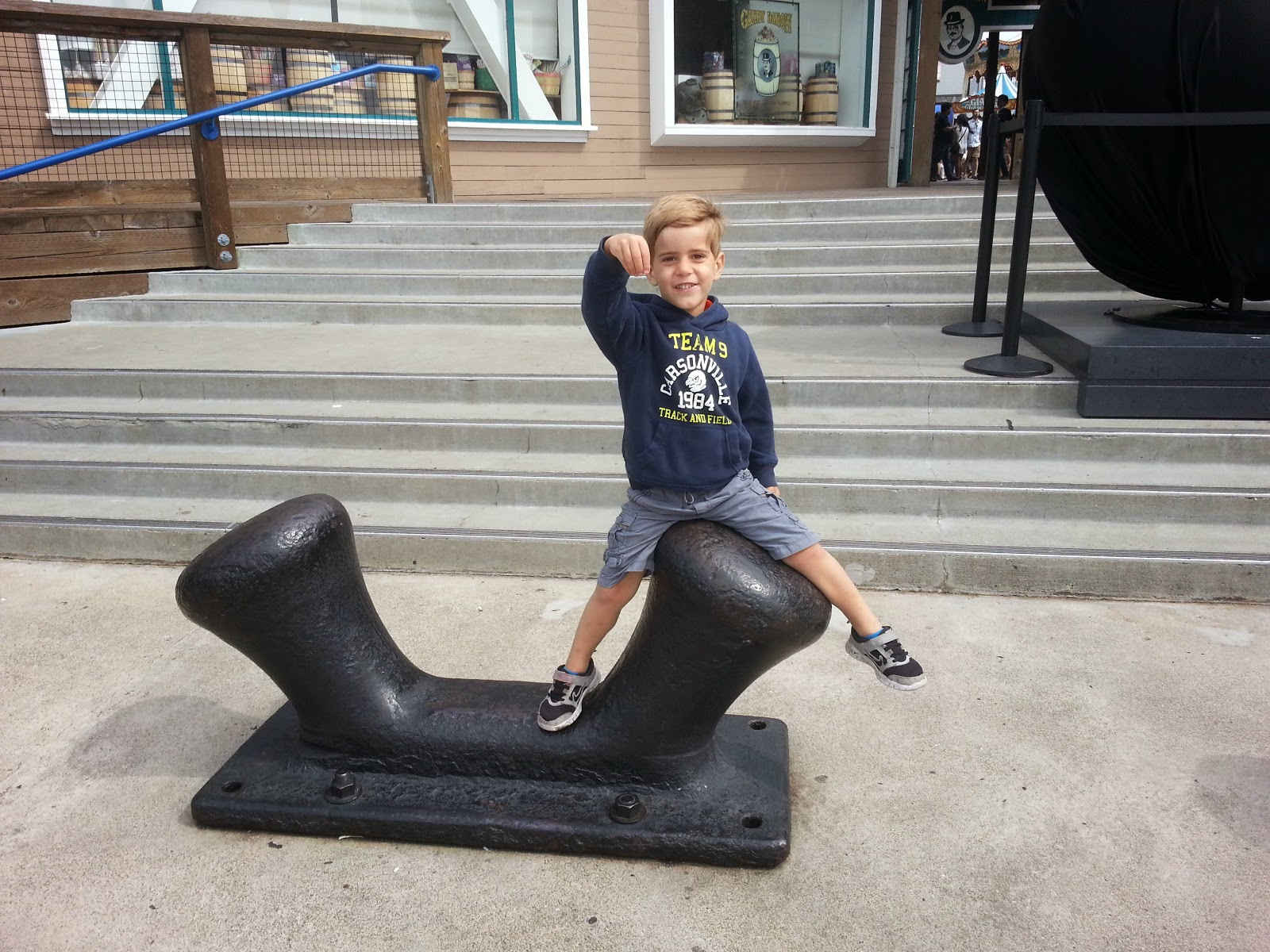 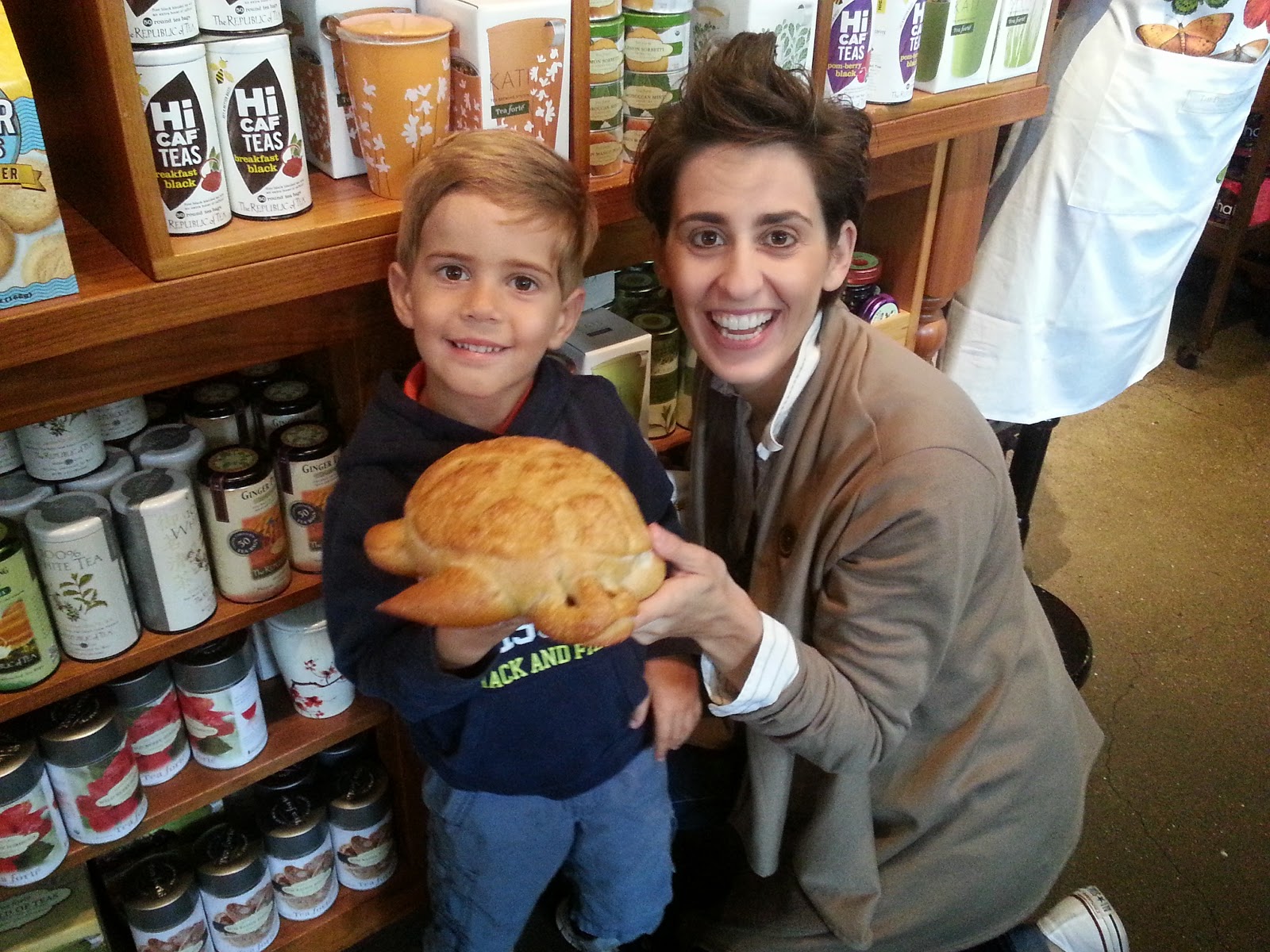 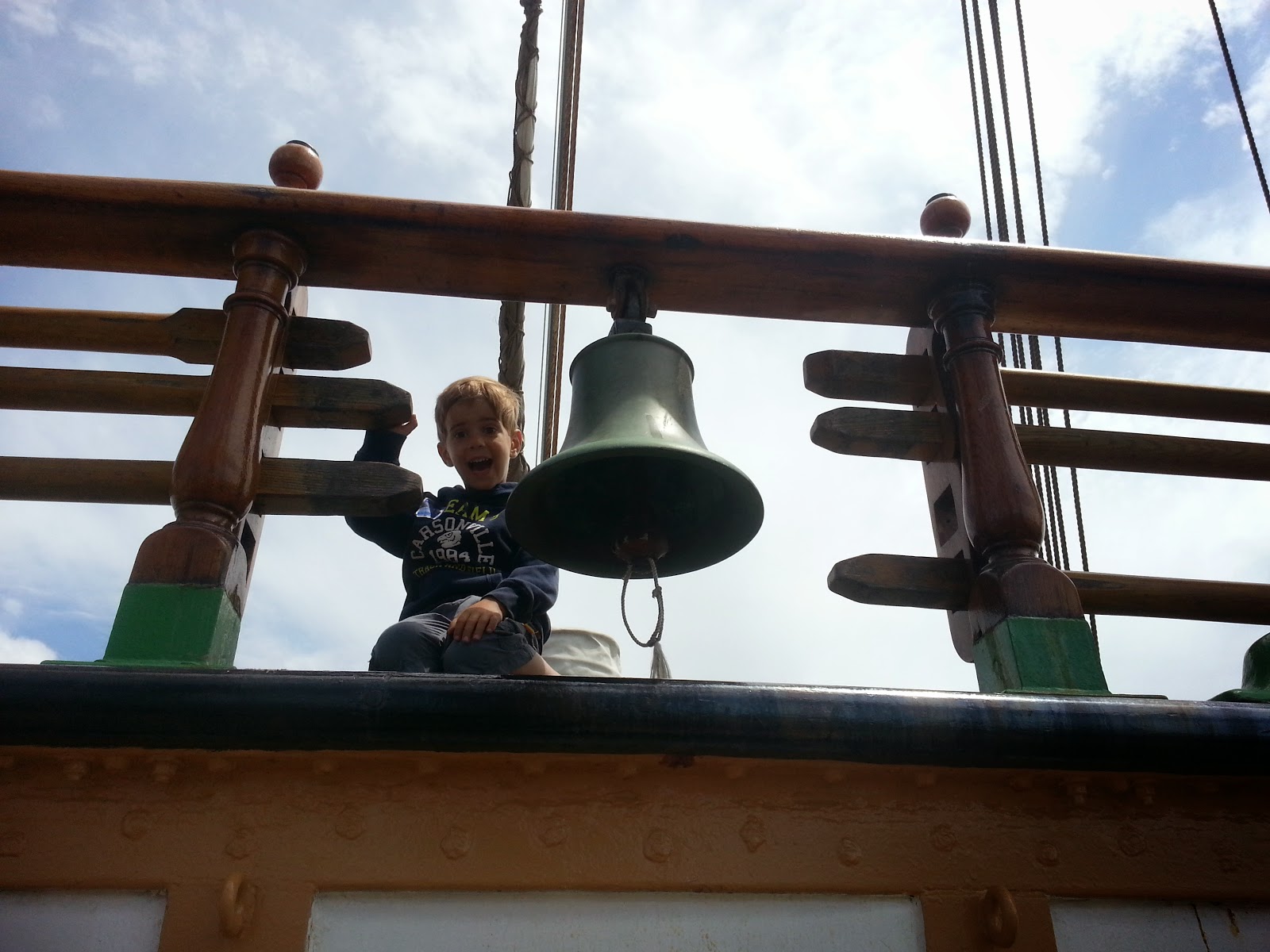 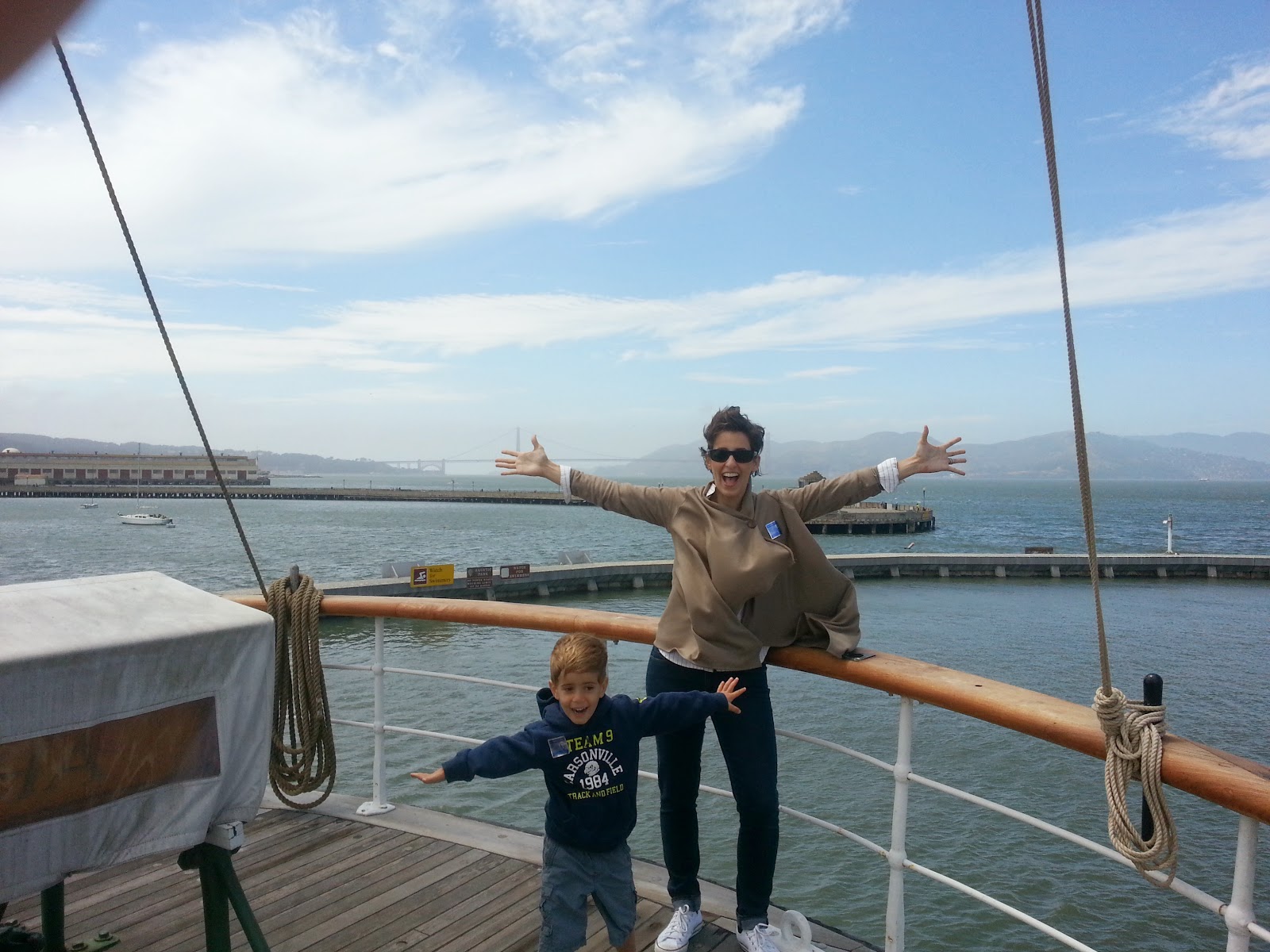 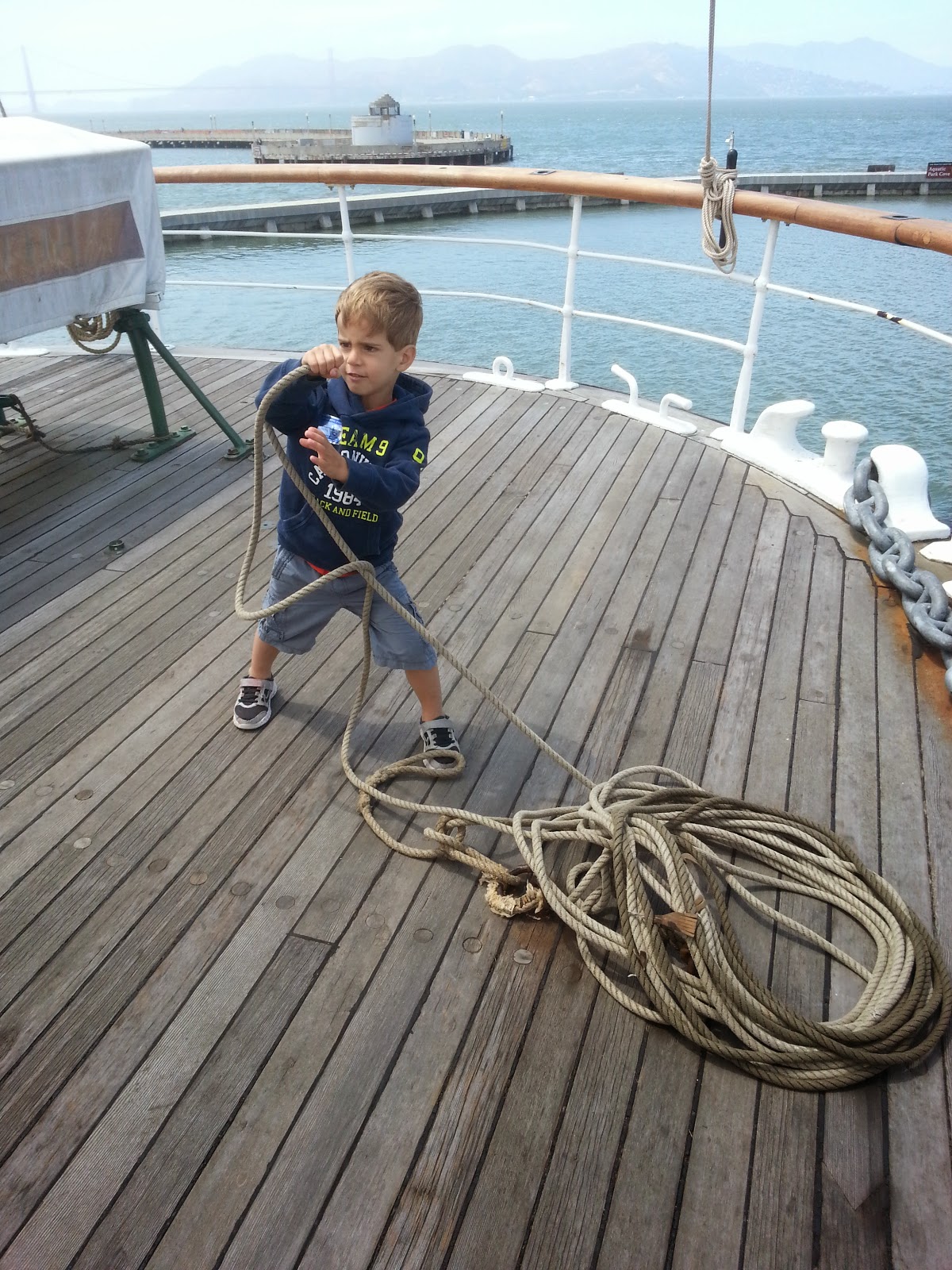 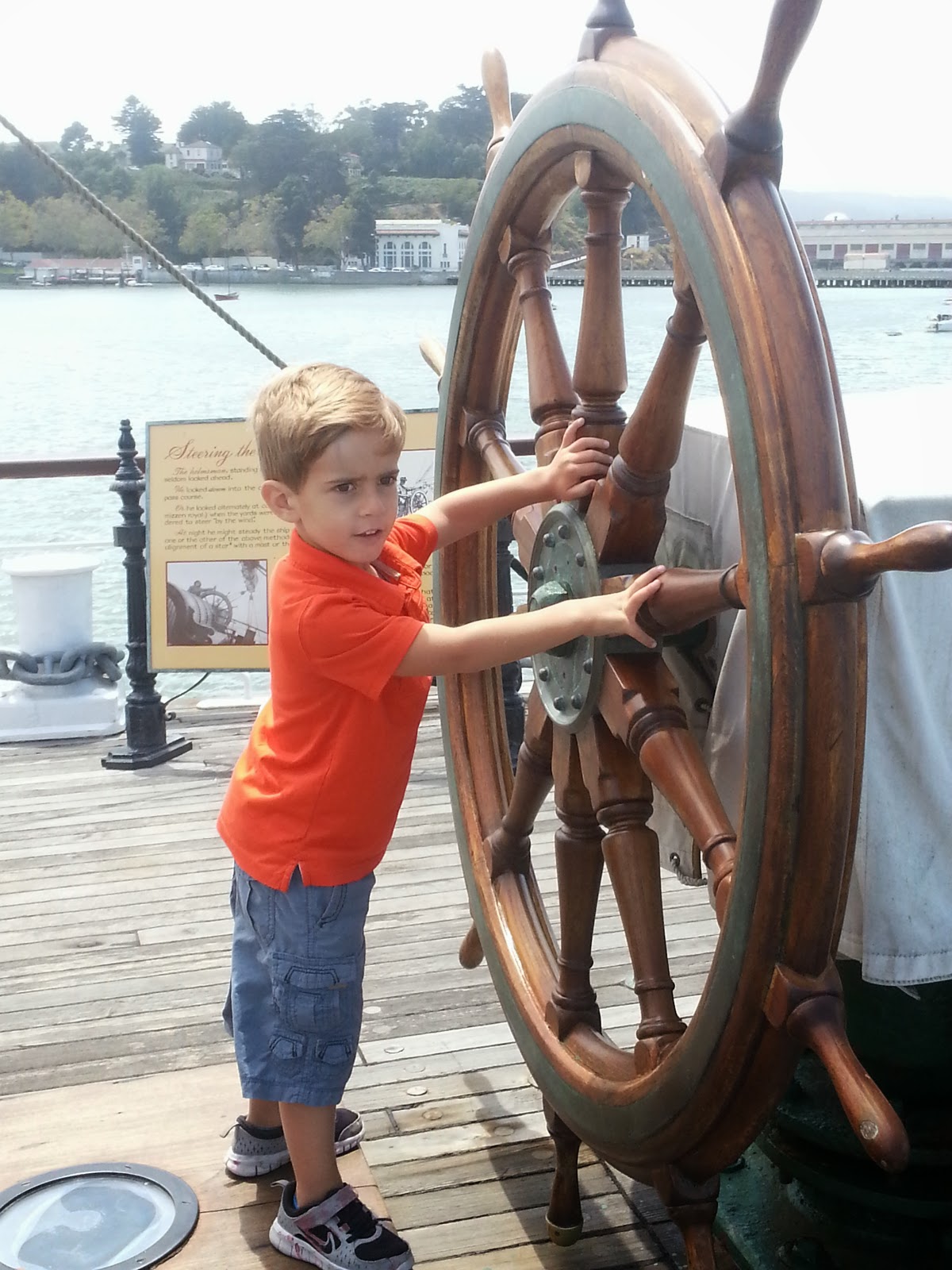 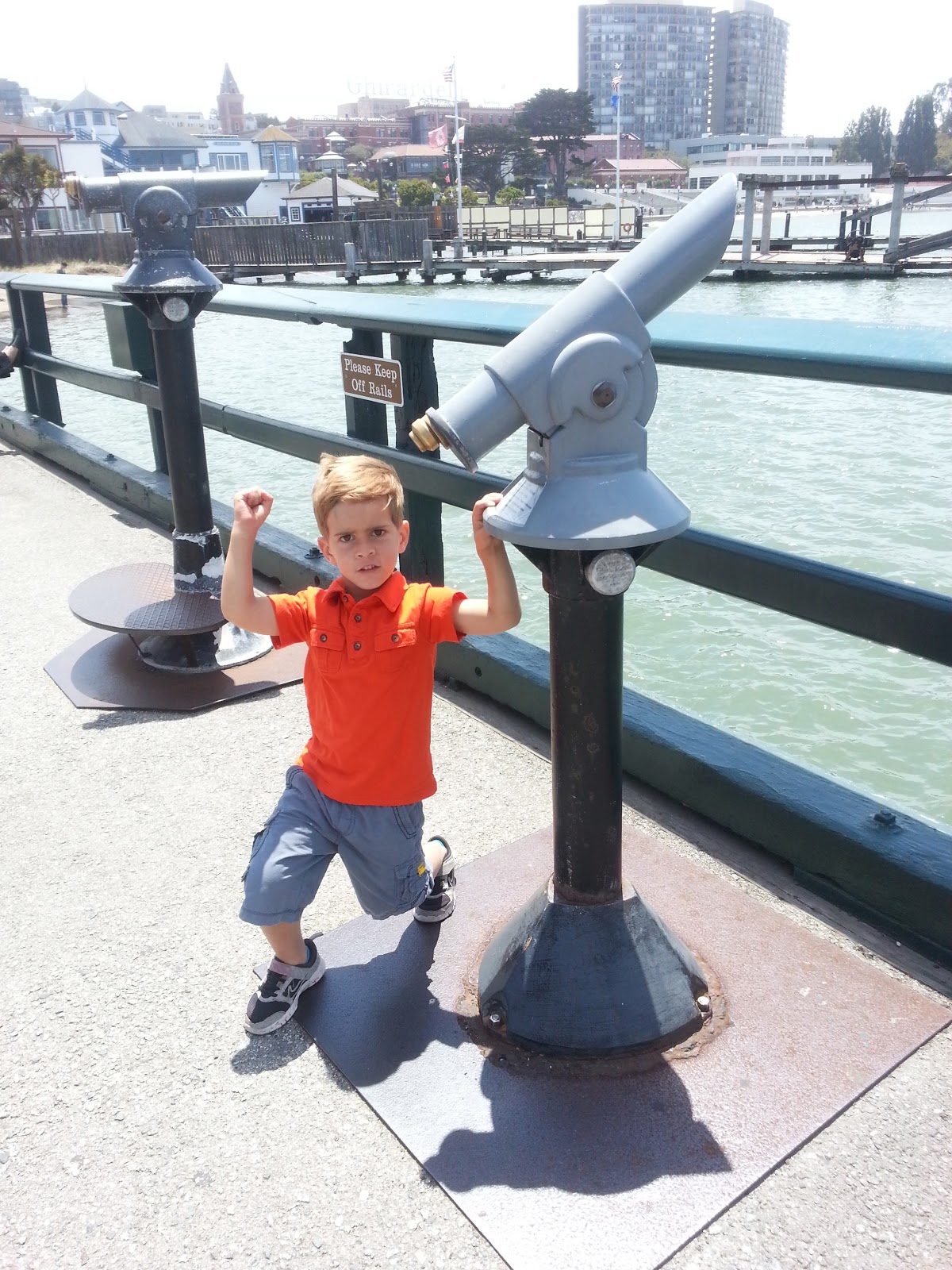