Up high! And down low.

And so began Zacchaio's high flyin' ride on medical marijuana!


CBD cut our baby boy's number of seizures in half!!
After only one single dose of CBD, the sparkle in Zacchaio's eyes returned. He bore weight on his elbows during tummy time and eagerly explored the world around him wide-eyed. He was stronger and had a rejuvenated spirit. He sat up tall in his high chair and successfully ate rice cereal... he took such delight in its taste that he even demanded more!
Zacchaio began having a mild cough on July 7th that became more concerning after he started to gag on mucus and spit up small amounts of milk. Not only does vomiting put him at risk for aspiration (accidental movement of gastric content into the lungs), but it also affects the amount of essential medications in his system (cardiac and anti-seizure medications). You can see in the images below that having laryngomalacia makes dealing with an average cold very difficult, as one's airway is floppy, narrowed, and even small amounts of mucus can completely impede air flow.
The night of July 8th, our high ended. Zacchaio coughed, gagged, struggled with expelling his stomach contents, and then vomited. Never having witnessed him act in such a way when spitting up, I feared that he might have aspirated. Five hours later once I started my 3-hour seizure shift, he sounded like he was drowning in his own lungs. His nostrils flared and his ribs were visible as his chest retracted forcefully to breathe. While Aidan stayed home with Alkaio, I took Zacchaio into Children's Hospital Oakland's ER.
If you know the early story of Zacchaio you know that we do not have a good track record with Children's Oakland, however I must admit that their ER was incredible! Only seconds after walking through emergency doors they whisked Zacchaio away and started working him up. The team of nurses, physicians, and respiratory therapists oozed experience from every pore and it showed in their confidence and execution. After giving him some oxygen support, drawing labs, and reviewing a not-too-concerning chest xray, I was told they would admit him for 24-hour observation. He was still not moving air through his lungs very well (plus in cases of aspiration, a chest xray won't actually show the aspiration until at least 24-hours after the event), so it made complete sense to play it conservatively. I was offered the option of having him transferred to UCSF and eagerly accepted knowing that all his specialty physicians would be there waiting to greet him.

This admission came at a very inconvenient time. In the last couple of weeks I worked long and hard to e-mail the top six ranked pediatric hospitals in neurology and neurosurgery asking for innovative medicine. Aidan and I pieced together an e-mail serving as a "Zacchaio commercial" that dangled a puzzling case and fantastic research opportunity in front of the best neurology departments in the nation. Three of them bit, but we excitedly pursued #1, Boston Children's Hospital. The Boston physician we were in contact with quickly felt like family through simple e-mail correspondence. In search of surgical teams with the highest rates of survival, lowest rates of surgical complications, and highest reputation for managing difficult cases... Boston was it. We feel we've found the best for our baby boy and are prepared to do whatever it takes to get him to it. In attempting to schedule our consultation, we were told it would be at least 6 weeks until Zacchaio could be seen. Naturally, our baby boy worked his magic and somehow after pulling the right strings we had an inpatient consult scheduled one week later on Tuesday, July 15th.
Except Zacchaio is still in the ICU struggling to breathe. And he aspirated again last night. 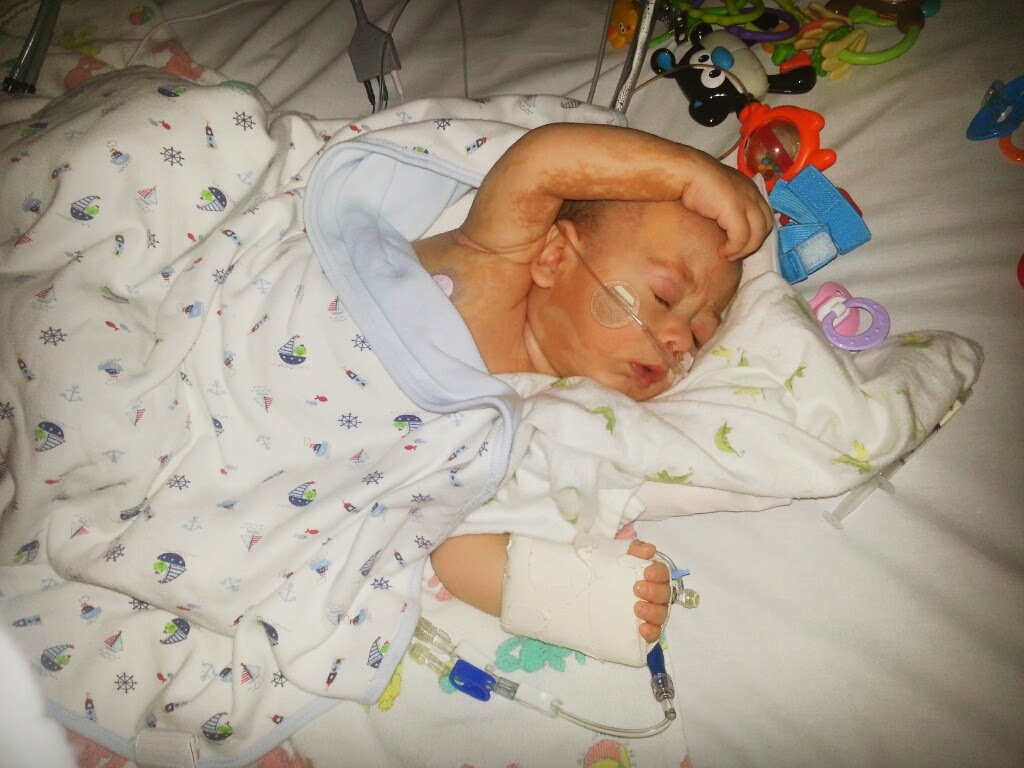 We're praying our little Z takes major strides in the next few days. Our last opportunity to arrive in time for Boston is a midnight flight on Tuesday, the day of the appointment. Once we arrive Zacchaio will have at least a week's worth of testing, scans, and imaging. What do we know? His seizures are originating in the right posterior (back) quadrant of his brain and are highly suspect of a brain malformation (common with Zacchaio's syndrome) in that area. What do we pray for? That Boston has innovative technologies that can further dissect the problematic quadrant and pinpoint the malformation. What if they find it? Brain surgery.
Keeping faith in God's plan, even though it can be really inconvenient sometimes...
Eternal gratitude for all of your generous donations toward medical expenses, thoughtful gifts, lovingly cooked dinners, fresh groceries, and donated time. Thank you for helping to take care of the small things so we can focus on the big adventure ahead .
﻿
Posted by Alexis KT at 5:21 PM