My last post ended with seizure counts on June 22nd and an increased concern that Zacchaio's seizures were worsening. In response, we added a second AED (anti-epileptic drug), Phenobarbital, which was able to effectively eliminate Zacchaio's "blue seizures." Just as we began to celebrate an ounce of progress, our trusty seizure log made us aware of an unfortunate upward trend of daily winks.

If you recall from a previous post, Zacchaio began having these "winking seizures" while being treated as an inpatient at UCSF following his very first "blue seizure." When I mentioned that my instincts led me to believe they were mini seizures, we were reassured that because they didn't correlate clinically with his EEG, they were merely involuntary muscle twitches.

We know Zacchaio. We knew they weren't muscle twitches.

On Friday, June 27th we felt it was time to nudge the neurologists a bit more and we took Zacchaio into the ER for another EEG. We figured we wouldn't be waiting long to capture his abnormal electrical activity, as Zacchaio had been winking every 10-30 minutes for the preceding 4 days, on the way to the ER, and in the ER while the EEG was being placed. After four hours of monitoring and just before pulling the EEG plug, he winked! And winked! And winked some more... Enough kid, we proved our point! This time every wink clinically correlated with the EEG which offered the neurologists the enlightening experience of telling us we were right. I imagined hearing it out loud would be empowering, but I felt ironically disheartened.

After 8 hours in the ER, we left with a new third prescription, Zonegran.

For the last week, Zacchaio's winks have mostly plateaued in the high 200s and low 300s. We were impressed with how well he was tolerating being on three AEDs. In fact, he was surprisingly making developmental gains while on them!

As drug levels and our hopes for improvement rose, we saw a change in Zacchaio. His smiles were delayed, movements were not as sharp, and his head and neck control weakened compared to just a week prior. He began having long periods of apnea (not breathing for 10 seconds at a time), and began arching his back when attempting a pull-to-sit. These regressions were unfortunately not at the expense of a decreased number of seizures. We doubled his dose of Zonegran hoping for even the slightest response and all that disappeared was his appetite. Zacchaio had been taking 70% of his bottles by mouth just days before, and now he lacked any and all interest in food to the extent that he wouldn't attempt a single suck.

Days passed and after seeing no changes in his seizures and increased regression in his development, the latest drug added to his daily regimen was deemed a failure. There had to be something else.

Feeling like Zacchaio's epilepsy management had been rather "cookie cutter" up to this point, we went for our Hail Mary (Jane) and asked our pediatrician if she would be willing to recommend medical marijuana. Knowing our story all too well, she agreed without hesitation to write the first recommendation of her career. Within an hour we were in touch with a dispensary that offered a high-CBD low-THC tincture, and within 5 hours my in-laws and Alkaio were making a drug deal in the parking lot of an Orchard Supply Hardware in Modesto.

Father In-Law: So how do we recognize him? Black Fedora? Red carnation in his lapel?
Me: He said he has long black hair and a goatee. White pickup truck. Cash only.
Meanwhile at Orchard Supply...
MMJ: You Dan?
Father In-Law: Yup!
MMJ: Get in.
And that's the story of our Hail Mary drug deal!

Our hope? That July 3, 2014 goes down in our family's history as the day Zacchaio started reclaiming the joyful life he had only just begun to experience. 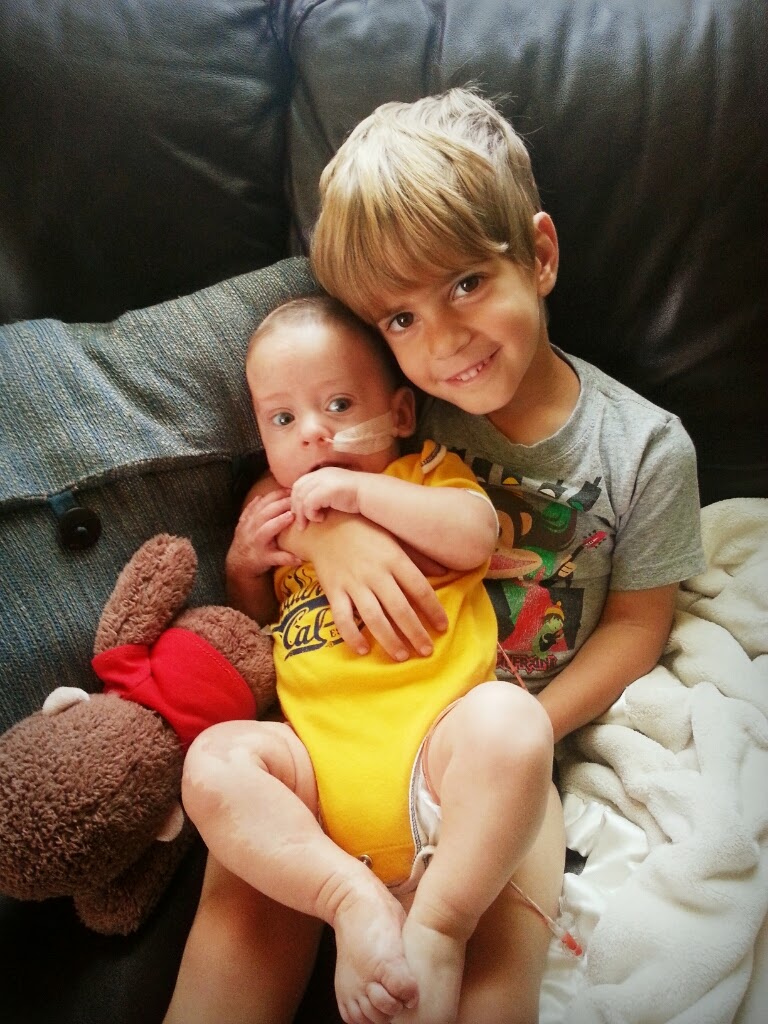